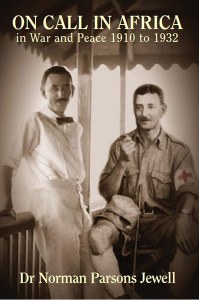 On Call In Africa

A unique and fascinating combination of personal memoirs, corroborated by official war diaries, richly illustrated with personal photographs of events 1910-1932 in East Africa. These memoirs of Dr Norman Jewell provide an intriguing account of the life of a young doctor working for the Colonial Medical Services starting in the Seychelles in 1910.

After four idyllic years, Norman joined WW1 in East Africa; he was posted to Kisumu on Lake Victoria as a Captain in the British Army and then to the Field Ambulance unit. This took him all over British and German East Africa via circuitous routes and battlefield skirmishes chasing the elusive, undefeated German commander General Paul von Lettow-Vorbeck. Aside from the risk of injury and death from the battlefields, he faced hunger, recurrent malaria and dysentery attacks.

The supply chain was fraught with difficulties due to the vast distances of walking it took to deliver goods. Mention is made of the Pike report which exposed the poor management of the Medical Service command. After a particularly bad bout of malaria in late1917, Norman spent six weeks convalescing in the Seychelles where he met his young daughter for the first time.

Returning to East Africa he rejoined the Ambulance unit in the Lindi area where the pursuit of Von Lettow-Vorbek continued through the southern part of German East Africa (now Tanzania). He was awarded the Military Cross for gallantry in 1917 and continued to serve in the front line until the end of the war.

He returned to civilian life as a doctor in the Colonial Medical services in Kisumu and was confronted by the Spanish Flu pandemic. The story also encompasses his escape, while on leave in 1920, from assassination during the Bloody Sunday events in Dublin.

Norman recounts the development of medicine in the young colony, the management of epidemics and gives descriptions of the people and places he encountered while working in Mombasa, Nakuru and Nairobi until 1932.

The third part of the book is a short biography of his wife, Sydney Auchinleck, a published poet at sixteen years and the first woman to graduate in chemistry from Trinity College, Dublin. It describes the early years of women's higher education in Ireland, her frustrated desire to become an engineer and follows what happened to their children.This memoir and the war diary transcripts are a timely contribution to the commemoration of the centenary of WW1.

On Call is a well written manuscript on a little-touched on aspect of the campaign in East Africa - that of a doctor who served from December 1914 through to 1918 with the 3rd African Field Force: one of the longest serving in the field. Apart from the war and medical aspects, Norman's account opens the window on cultural and social aspects of the time, as well as some insight into the workings of the colonial service. The book contains Norman's memoirs as he wrote them, relevant War Diaries of the time transcribed from records mostly in his own hand and a brief history of his incredible wife, Sydney. The age of the internet and the connections it has brought has enabled detailed footnoting and biographical details to be included on virtually every name mentioned in the book. I hope others get as much enjoyment and use out of reading the book as I did working with the family researching Norman's World War 1 experiences. Dr Anne Samson