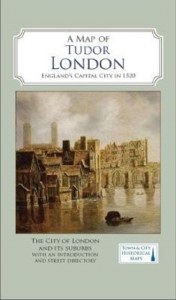 A full colour map showing London in about 1520 - its many churches, monasteries, legal inns, guild halls, and a large number of substantial private houses, in the context of the streets and alleyways that survived the Great Fire and can still be discovered. Dominating the city are the Tower of London in the east, the old St Paul's Cathedral in the west and London Bridge in the south. The city was largely contained within its medieval walls and ditches but shows signs of spilling out into the great metropolis it was destined to be.

The map is a new version of a successful map of Tudor London first published in 2013, updated to include new information, completely redrawn and recoloured and at a larger scale. The map includes on the reverse a short introduction to the city's history, and an illustrated and comprehensive directory lists all the city's streets and its main buildings with a grid reference for easy finding.