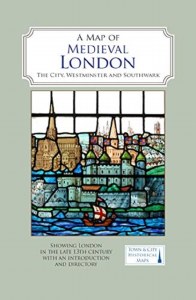 A Map of Medieval London

A Map of Medieval London : The City, Westminster and Southwark

A full colour map showing London about 1270 to 1300 - its walls and gates, parish churches, early monasteries and hospitals, and a growing number of private houses. The city's streets and alleyways had been established. Dominating London are the Tower of London in the east, the old St Paul's Cathedral in the west and London Bridge in the south.

Up-river in Westminster, the abbey and the royal palace had been well established, and the great Westminster Hall is very evident. London's playground in Southwark was beginning to grow.