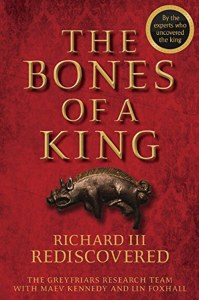 The dramatic story of Richard III, England's last medieval king, captured the world's attention when an archaeological team led by the University of Leicester identified his remains in February 2013. Bones of a King presents the official behind-the-scenes story of the Grey Friars dig based on the research of the specialists directly involved in the discovery. * A behind-the-scenes look at one of the most exciting historical discoveries of our time * Features numerous photographs of the dig as well as the king's remains * Explains the scientific evidence behind his identification, including DNA retrieval and sequencing, soil samples, his wounds and his scoliosis, and what they reveal about his life, his health and even the food he ate * Builds an expansive view of Richard's life, death and burial, as well as accounts of the treatment of his body prior to burial, and his legacy in the public imagination from the time of his death to the present * The most extensive and authoritative book written for non-specialists by the team who discovered Richard III.