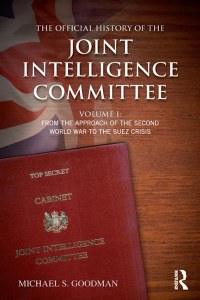 Joint Intelligence Commitee : Vol.1- From the approach of the Second World War to The Suez Crisis

Volume One of the Official History of the Joint Intelligence Committee draws upon a range of released and classified papers to produce the first, authoritative account of the way in which intelligence was used to inform policy. For almost 80 years the Joint Intelligence Committee (JIC) has been a central player in the secret machinery of the British Government, providing a co-ordinated intelligence service to policy makers, drawing upon the work of the intelligence agencies and Whitehall departments. Since its creation, reports from the JIC have contributed to almost every key foreign policy decision taken by the British Government.

This volume covers the evolution of the JIC since 1936 and culminates with its role in the events of Suez in 1956. This book will be of much interest to students of intelligence studies, British politics, international diplomacy, security studies and International Relations in general.