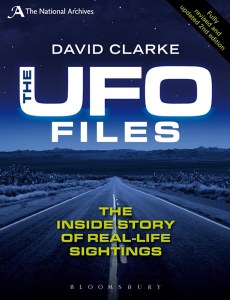 The UFO Files : The Inside Story of Real-life Sightings. 2nd edition

'What does all this stuff about flying saucers amount to? What can it mean? What is the truth?' Winston Churchill, prime minister's personal minute, 28th July 1952 The UFO Files tells the story of over 100 years of UFO sightings, drawing on formerly secret government documents at the National Archives in London. Alongside extraordinary reports by ordinary people, it reveals details of official interest and investigations stretching back more than 80 years. In this remarkable book, fully updated for this second edition, David Clarke reveals an array of startling stories from possible UFO reports hidden among Met Office investigations of aerial phenomena in the 1920s to the conclusions of Project Condign, the secret British Intelligence UFO study completed in 2000.

As well as covering Roswell and Britain's own Rendlesham Forest mystery, Clarke raids the records for dramatic stories of abductions and close encounters, ghost aircraft and crop circles, and UFO reports by both civilian aircrew and military personnel. Dramatic witness statements and interviews combine with rarely seen photographs, drawings and newly available documents to offer a unique guide to one of our most intriguing mysteries.