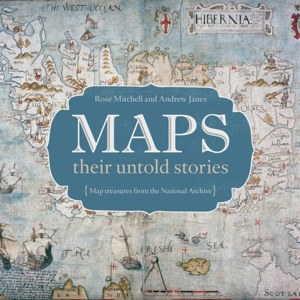 Maps Their Untold Stories : Map Treasures From The National Archives

A map is a snapshot of a place, a city, a nation or even the world at a given point in time - fascinating for what they tell us about the way our ancestors saw themselves, their neighbours and their place in the world. This magnificent collection, drawn from seven centuries of maps held in the National Archives at Kew, looks at a variety of maps, from those found in 14th Century manuscripts, through early estate maps, to sea charts, maps used in military campaigns, and maps from treaties. The text explores who the mapmakers were, the purposes for which the maps were made, and what it tells us about the politics of the time.

Great images are accompanied by compelling stories. Featured is a woodcut map of 16th Century London, a map of where the bombs fell during the Second World War, and a map the first American settlers' drew when they were attempting to establish a new empire on Roanoke Island, off the coast of what is now North Carolina. Richly illustrated with large scale reproductions of the maps, the book also includes some of the more amusing or esoteric maps from the National Archives, such as the map of the Great Exhibition in 1851 that was presented on a lady's glove, a London Underground map in the form of a cucumber, and a Treasure Island map used to advertise National Savings.

This is a fascinating and unusual journey through the world of maps and mapmakers.

Maps, their untold stories is a fantastic showcases of the breadth and depth of our incredible map collection and an excellent example of colleagues working together to produce a high quality publication which will be of interest to a huge range of people. Jeff James Keeper of the National Archives

Map Of A Nation : The Biography of the Ordnance Survey

Maps Of The United Kingdom

The Nine Lives of John Ogilby

The Writer's Map: An Atlas Of Imaginary Lands

Theatre Of The World: The Maps That Made History