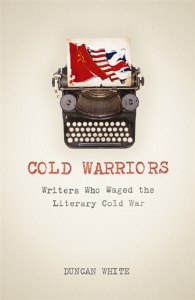 In this age of 24-hour news coverage, where rallying cries are made on Twitter and wars are waged in cyberspace as much as on the ground, the idea of a novel as a weapon that can wield any power feels almost preposterous. The Cold War was a time when destruction was merely the press of a button away, but when the real battle between East and West was over the minds and hearts of their people. In this arena the pen really was mightier than the sword.

This is a gripping, richly-populated history of spies and journalists, protest and propaganda, idealism and betrayal. And it is the story of how literature changed the course of the Cold War just as much as how Cold War would change the course of literature. Using hitherto classified security files and new archival research White explores the ways in which authors were harnessed by both East and West to impose maximum damage on the opposition; how writers played a pivotal role (sometimes consciously, often not) in the conflict; and how literature became something that was worth fighting and dying for.

With a cast that includes George Orwell, Arthur Koestler, Graham Greene, Boris Pasternak, Andrei Sinyavsky, Mary McCarthy and John le Carre, and taking the reader from Spain to America to England and to Russia, this is narrative history at its most enthralling and most pertinent - pertinent because even if on the face of it there is a huge difference between 140 characters and 100,000 words, at the heart of both is the power of stories to change the fate of nations.