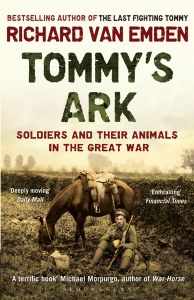 For soldiers in the First World War, going over the top was a comparatively rare event; much more frequently, they were bored and lonely and missing their families at home. Needing an outlet for their affection, many found it in the animal kingdom. Tommy's Ark looks at the war through the eyes of the soldiers who were there, and examines their relationship with a strange and unexpected range of animal life, from horses, dogs and cats to monkeys and birds - even in one case a golden eagle.

Animals became mascots - some Welsh battalions had goats as mascots, some of the Scots had donkeys. And then there were the animals and insects that excited curiosity amongst men drawn into the army from the industrial heartlands of Britain, men who had little knowledge of, let alone daily contact with, wildlife. Civilians turned soldiers observed the natural world around them, from the smallest woodlouse to voles, mice and larger animals such as deer and rabbit.

Richard van Emden explores his subject far more radically than previous attempts, revealing how, for example, a lemur was taken on combat missions in the air, a lion was allowed to pad down the front line trenches and how a monkey lost its leg during the fighting at Delville Wood on the Somme. This title is illustrated with more than sixty previously unseen or rarely published photographs, drawn mainly from the author's own extraordinary collection.