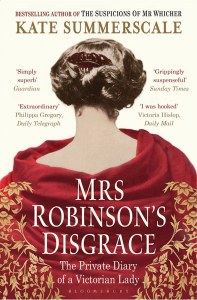 Mrs Robinson's Disgrace : The Private Diary of a Victorian Lady

Mrs Robinson's Disgrace : The Private Diary of a Victorian Lady

When the married Isabella Robinson was introduced to the dashing Edward Lane at a party in 1850, she was utterly enchanted. He was 'fascinating', she told her diary, before chastising herself for being so susceptible to a man's charms. But a wish had taken hold of her, and she was to find it hard to shake...In one of the most notorious divorce cases of the nineteenth century, Isabella Robinson's scandalous secrets were exposed to the world.

Kate Summerscale brings vividly to life a frustrated Victorian wife's longing for passion and learning, companionship and love, in a society clinging to rigid ideas about marriage and female sexuality.

The Suspicions of Mr Whicher was a surprise hit on publication and Kate Summerscale’s new book based on an intimate diary and a scandalous trial follows suit. The frisson of reading another’s diary, the salaciousness of eavesdropping in the divorce courts and a serious examination of constraints on a Victorian wife are all here. Threaded through the narrative is the intriguing puzzle of did she, didn’t she? Was Isabella Robinson, neurotic and sexually repressed, seeking an outlet for her fantasy life in her diary or did she find an escape from her unhappy marriage in, as the novels say, 'the arms of another'? For those interested in the contradictions inherent in the Victorian age, particularly the role of women or just those craving a good story this is an absorbing read. Sally Hughes Assistant Retail Manager

The Criminal Conversation of Mrs Norton