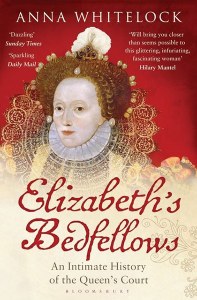 Elizabeth's Bedfellows : An Intimate History of the Queen's Court

Elizabeth I acceded to the throne in 1558, restoring the Protestant faith to England. At the heart of the new queen's court lay Elizabeth's bedchamber, closely guarded by the favoured women who helped her dress, looked after her jewels and shared her bed. Elizabeth's private life was of public, political concern.

Her bedfellows were witnesses to the face and body beneath the make-up and elaborate clothes, as well as to rumoured illicit dalliances with such figures as Robert Dudley. Their presence was for security as well as propriety, as the kingdom was haunted by fears of assassination plots and other Catholic subterfuge. For such was the significance of the queen's body: it represented the very state itself.

This riveting, revealing history of the politics of intimacy uncovers the feminized world of the Elizabethan court. Between the scandal and intrigue the women who attended the queen were the guardians of the truth about her health, chastity and fertility. Their stories offer extraordinary insight into the daily life of the Elizabethans, the fragility of royal favour and the price of disloyalty.

Elizabeth's Women : The Hidden Story of the Virgin Queen

The Temptation Of Elizabeth Tudor