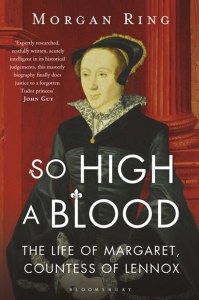 So High A Blood : The Life of Margaret, Countess of Lennox

Sometime heir to the English throne, courtier in danger of losing her head, spy-mistress and would-be architect of a united Catholic Britain: Lady Margaret Douglas is the Tudor who survived and triumphed -but at a terrible cost. Niece to Henry VIII and half-sister to James V of Scotland, the beautiful and Catholic Margaret held a unique position in the English court. Throughout her life, she was to navigate treacherous waters: survival demanded it.

Yet Margaret was no passive pawn. As the Protestant Reformations unfolded across the British Isles, she had ambitions of her own: to see her family rule a united, Catholic Britain. When her niece Mary, Queen of Scots was widowed, Margaret saw her chance.

Thoroughly Machiavellian, she set in motion a chain of events that would see her descendants succeed to the crowns of England, Ireland and Scotland. Drawing on previously unexamined archival sources, So High a Blood revives the story of Lady Margaret Douglas to vivid and captivating effect.