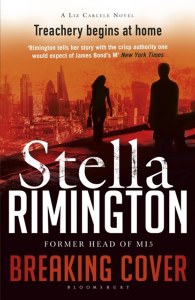 Recovering from a gruelling terrorist investigation, Liz Carlyle has been posted to MI5's counter-espionage desk. Her bosses hope the change of scene will give her some breathing space, but they haven't counted on Putin's increased aggression towards the West. Soon Liz is on the hunt for a Russian spy who threatens to plunge Britain back into the fraught days of the Cold War.

Meanwhile, MI6 has hired Jasminder Kapoor, a controversial young civil rights lawyer, to explain issues of privacy and security to the public. But in this world of shadowy motives and secret identities, Jasminder must be extra-careful about whom she can trust ...