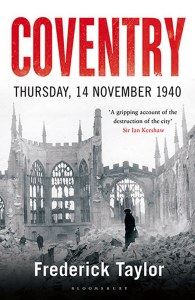 At a few minutes past seven on the evening of Thursday, November 14 1940, the historic industrial city of Coventry was subjected to the longest, most devastating air raid England had yet experienced. Only after eleven hours of continual bombardment by the German Luftwaffe could its people emerge from their half-sunk Anderson shelters and their cellars, from under their stairs or kitchen tables, to venture up into their wounded city.
That long night of destruction marked a critical moment in the Second World War.

It heralded a new kind of air warfare, one which abandoned the pursuit of immediate military goals and instead focused on obliterating all aspects of city life. It also provided the push America needed to join Britain in the war. But while the Coventry raid was furiously condemned publicly, such effective enemy tactics provided Britain's politicians and military establishment with a 'blueprint for obliteration', to be adapted and turned against Germany.

A merciless four-year war of attrition had begun. In this important work of history, Frederick Taylor draws upon numerous sources, including eye witness interviews from the archives of the BBC which are published here for the first time, to reveal the true repercussions of the bombing of Coventry in 1940. He teases out the truth behind the persistent rumors and conspiracy theories that Winston Churchill knew the raid was coming, assesses this significant turning point in modern warfare, looks at how it affected England's status in the war, and considers finally whether this attack really could provide justification for the horror of Dresden, 1945.