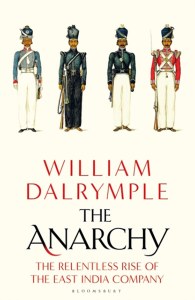 The Anarchy : The Relentless Rise of the East India Company

In August 1765 the East India Company defeated the young Mughal emperor and forced him to establish in his richest provinces a new administration run by English merchants who collected taxes through means of a ruthless private army - what we would now call an act of involuntary privatisation. The East India Company's founding charter authorised it to `wage war' and it had always used violence to gain its ends. But the creation of this new government marked the moment that the East India Company ceased to be a conventional international trading corporation dealing in silks and spices and became something much more unusual: an aggressive colonial power in the guise of a multinational business.

The Company's reach stretched until almost all of India south of the Himalayas was effectively ruled from a boardroom in London. The Anarchy tells the remarkable story of how one of the world's most magnificent empires disintegrated and came to be replaced by a dangerously unregulated private company, based thousands of miles overseas in one small office, five windows wide, and answerable only to its distant shareholders.