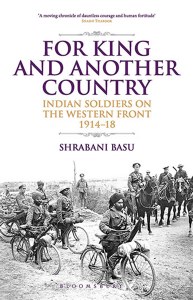 For King & Another Country : Indian Soldiers on the Western Front 1914-18

Over a million Indian soldiers fought in the First World War, the largest force from the colonies and dominions. Their contribution, however, has been largely forgotten. Many soldiers were illiterate and travelled from remote villages in India to fight in the muddy trenches in France and Flanders.

Many went on to win the highest bravery awards. For King and another Country tells, for the first time, the personal stories of some of these Indians who went to the Western Front: from a grand turbanned Maharaja rearing to fight for Empire to a lowly sweeper who dies in a hospital in England, from a Pathan who wins the Victoria Cross to a young pilot barely out of school. Shrabani Basu delves into archives in Britain and narratives buried in villages in India and Pakistan to recreate the War through the eyes of the Indians who fought it.

There are heroic tales of bravery as well as those of despair and desperation; there are accounts of the relationships that were forged between the Indians with their British officers and how curries reached the frontline. Above all, it is the great story of how the War changed India and led, ultimately, to the call for independence.