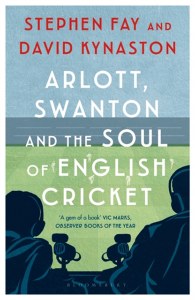 Beautifully written, meticulously researched and stuffed with rich sporting and social history ... Unputdownable' Mail on Sunday After the Second World War, as the BBC tightened its grip on the national consciousness, two of the most famous English voices were commentators on games of cricket. John Arlott and E.W.

('Jim') Swanton transformed the broadcasting of the nation's summer game into a national institution. Arlott and Swanton typified the contrasting aspects of post-war Britain. Because of their strong personalities and distinctive voices - Swanton's crisp and upper-class, Arlott's with its Hampshire burr - each had a loyal following.

As England moved from a class-based to a more egalitarian society, nothing stayed the same - including professional cricket. Wise, lively and filled with rich social and sporting history, Arlott, Swanton and the Soul of English Cricket shows how, as the game entered a new era, these two very different men battled to save the soul of the game.