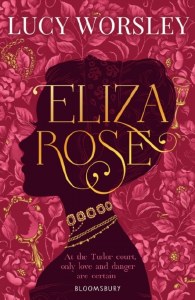 The captivating debut children's novel from popular television historian Lucy Worsley is an exciting and charming glimpse behind the scenes of the Tudor court. I would often wonder about my future husband. A knight? A duke? A stable boy?Of course the last was just a wicked fancy.

Eliza Rose Camperdowne is young and headstrong, but she knows her duty well. As the only daughter of a noble family, she must one day marry a man who is very grand and very rich. But Fate has other plans.

When Eliza becomes a maid of honour, she's drawn into the thrilling, treacherous court of Henry the Eighth ... Is her glamorous cousin Katherine Howard a friend or a rival? And can a girl choose her own destiny in a world ruled by men?