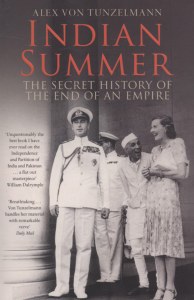 The stroke of midnight on 15 August 1947 liberated 400 million Indians from the British Empire. One of the defining moments of world history had been brought about by a tiny number of people, including Jawaharlal Nehru, the fiery prime minister-to-be; Gandhi, the mystical figure who enthralled a nation; and Louis and Edwina Mountbatten, the glamorous but unlikely couple who had been dispatched to get Britain out of India without delay. Within hours of the midnight chimes, however, the two new nations of India and Pakistan would descend into anarchy and terror.

Indian Summer depicts the epic sweep of events that ripped apart the greatest empire the world has ever seen, and reveals the secrets of the most powerful players on the world stage: the Cold War conspiracies, the private deals, and the intense and clandestine love affair between the wife of the last viceroy and the first prime minister of free India. With wit, insight and a sharp eye for detail, Alex von Tunzelmann relates how a handful of people changed the world for ever.