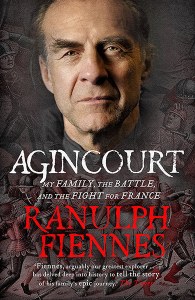 Agincourt : My Family, the Battle, and the Fight for France

25 October 2015 is the 600th anniversary of the battle of Agincourt - a hugely resonant event in English (and French) history. Sir Ranulph Fiennes casts new light on this epic event, revealing that three of his own ancestors fought in the battle for Henry V, and at least one for the French. This is a unique perspective on Agincourt from a trained and decorated soldier.

Ran reveals the truth behind the myths and legends of the battle. He tells how after the battle Henry V entertained his senior commanders to dinner, where they were waited on by captured French knights. There is the story of Sir Piers Legge of Lyme Hall, who lay wounded in the mud while his mastiff dog fought off the French men-at-arms.

Then there is the legend that the French intended to cut off the first and second right hand fingers of every captured archer, to prevent him from using his bow. The archers raised those two fingers to the advancing French as a gesture of defiance. In this gripping new study Sir Ranulph Fiennes brings back to life these stories and more, including those of his own ancestors, in a celebration of a historical event integral to English identity.