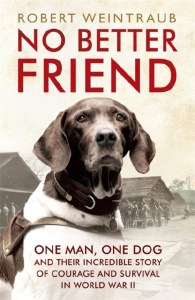 No Better Friend : One Man, One Dog, and Their Incredible Story of Courage and Survival in World War II

An extraordinary tale of the remarkable bond between one man and his dog during the Second World War. The two friends huddled close together, each of them the other's saving grace in a world gone to hell . .

. There was nothing terribly unusual about POWs suffering horribly at the hands of their Japanese captors. All across the Pacific theatre, Allied captives were experiencing similar punishment.

But there was one thing unusual about this particular duo of prisoners. One of them was a dog. Flight technician Frank Williams and Judy, a purebred pointer, met in the most unlikely of places: a World War II internment camp.

Judy was a fiercely loyal dog, with a keen sense for who was friend and who was foe, and the pair's relationship deepened throughout their captivity. When the prisoners suffered beatings, Judy would repeatedly risk her life to intervene.