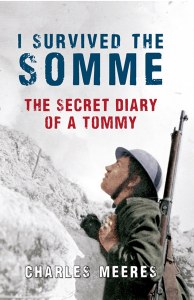 Charles Meeres served on the Western Front between 1915 and 1918. He kept a secret diary and painted many watercolours of life at the front, so that his diary gives a unique insight into the campaign in France over four years. He describes how he fought alongside the men of Kitchener's army at the Battle of Loos in 1915 and daily life in the trenches in the winter of that year.

He was present at the first day of the battle of the Somme (1 July 1916), as well as the subsequent phases of the battle, including the first introduction of the tank as a weapon of war. Subsequent battles include an account of the Battle of Arras in 1917, and a vivid description from his comrades of the Third Battle of Ypres. He describes the German advances in spring of 1918, and also the mobile warfare of the last months of the war when the German were in retreat across northern France: these sections come directly from the diaries as written up each night by Meeres, and bring to life the daily details of army life in the dramatic times of the First World War.