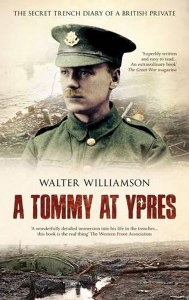 A Tommy At Ypres

A Tommy At Ypres

'There was a blinding flash and an ear-splitting report and the "prisoner" fell across me. The bullet had caught him full in the chin and passed out at the base of his skull.' In A Tommy at Ypres we see the First World War through the eyes of Walter Williamson. His remarkable diary provides a fascinating first-hand record of major military events ranging from the Third Battle of Ypres to the Somme Retreat - but it is also a moving story of one man's experience of war.

His vivid recollections describe his part in the 118th Brigade's involvement in the Battle of St Julien at the opening of the Third Battle of Ypres, then the Somme, and finally Ypres again. Alongside his diary extracts, his letters to his loving wife Amelia offer a deeply human account of the everyday hopes and fears experienced by the men of the trenches. Within these pages lies the reality of life for a Tommy: the bravery, the warm comradeship, the gentle humour, the strength of character and resilience, the sadness, the tragedy - A Tommy at Ypres reveals the true spirit of an outstanding generation.

Magnificent But Not War : The Second Battle of Ypres 1915

Passchendaele : The Fight for the Village

Passchendaele The Anatomy Of A Tragedy