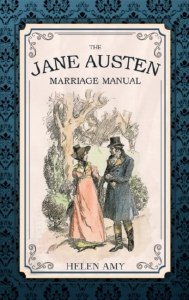 A strict code of conduct governed courtship and marriage in Regency England during the period in which Jane Austen's novels were set, broadly 1796 to 1816. At a time when womens' only real ambition appeared to be achieving a successful match, young women of the gentry class had to learn and adhere to these rules.

What was a girl to do? How should a mother direct her eligible (or not so eligible) daughter? Many turned to the etiquette manuals and 'conduct books' made available by a burgeoning publishing industry to advise young women in search of a husband. The Jane Austen Marriage Manual draws from this pool of early 'how to' popular literature, including many extensive facsimile extracts from the books read by Jane and her contemporaries (and actually referred to in her novels), as well as Jane's own experiences. It traces the many stages of courtship (and its potential pitfalls) from a girl's first entry into society through to her wedding day and beyond...