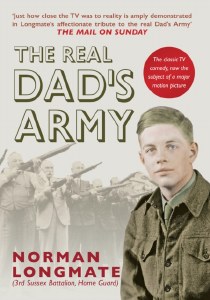 The Real Dad's Army : The Story of the Home Guard

The enduring popularity of the BBC TV series Dad's Army has focused attention on one of the strangest and least military armies ever formed - the British Home Guard. What started as an improvised band of volunteers had grown by 1942 into a conscripted, disciplined and well-equipped force with a strength of nearly two million men. Norman Longmate, himself a Home Guard veteran and an authority on wartime Britain, has collected together a wealth of hilarious anecdotes as well as all the unlikely facts to produce the first popular history of the Home Guard to be written since the war.

Longmate, ex-Private `F' Company, 3rd Sussex Battalion, Home Guard, joined `Dad's Army' at the same age as the fictional character `Pike', and to this day he contends that the much-loved sitcom was remarkably accurate in its portrayal of life in the Home Guard.