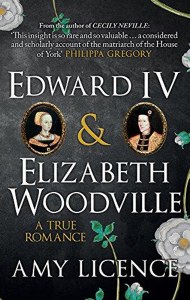 When the tall, athletic Edward of York seized the English throne in 1461, he could have chosen any bride he wanted. With his dazzling good looks, few were able to resist his charm and promises. For three years he had a succession of mistresses, while foreign princesses were lined up to be considered for his queen.

Then he fell in love. Enter Elizabeth Woodville, a widow five years his elder. While her contemporaries and later historians have been divided over her character, none have denied her beauty.

When she petitioned the king to help restore her son's inheritance, the young Edward was immediately spellbound. This romance was not to be just another fling. Conscious of her honour and her future, Elizabeth repelled his advances.

Edward's answer was to make her his wife. It was to prove an unpopular decision. Since then, Edward's queen has attracted extreme criticism from hostile chroniclers, her actions interpreted in the bleakest of lights.

In this enlightening book, Amy Licence reassesses the tumultuous lives of the real White Queen and the king she captivated.