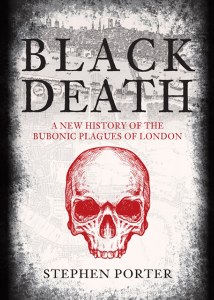 Black Death : A New History of the Bubonic Plagues of London

Evidence of the foulness and cruelty of the greatest catastrophe ever to hit London is still being unearthed under the streets of the capital today. The fresh plague pits containing thousands of skeletons uncovered during the construction of Crossrail are a reminder of the painful, drawn-out death suffered by Londoners as pustules and abscesses broke out all over their bodies. Plague has been a scourge of mankind since its onset in the sixth century.

Its distinctive and repulsive symptoms, the excruciatingly painful effects inflicted on its victims, with a very high mortality rate, evoked a fear and repulsion that was caused by no other disease. Attempts to control its spread proved futile. The second plague pandemic in Europe began when the disease reached Sicily in October 1347.

From there it spread remorselessly across the entire continent and erupted in London in the autumn of 1348, killing at least one-third, and perhaps one-half, of its inhabitants. As the largest city in England, London suffered a higher death-toll than any other community during the many subsequent outbreaks. Tudor and Stuart London was a city afflicted by plague, yet its population continued to grow inexorably, as it drew people from the rest of the country to replace the losses.

Plague's last visitation came in 1665 and was its most destructive, claiming at least 70,000 victims in the space of just eight months and becoming known as the Great Plague. The legacy of plague has been a dread that has scarcely been overcome even today.

The Executioner of St Paul's