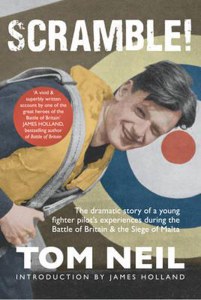 Scramble : The Dramatic Story of a Young Fighter Pilot's Expericnes During the Battle of Britain & the Siege of Malta

This is a fighter pilot's memoir of four tumultuous years, 1938-1942, when he was first trained, then fought and survived in not one but two of the biggest aerial campaigns of the war, the Battle of Britain and the equally epic, but lesser known, Siege of Malta.