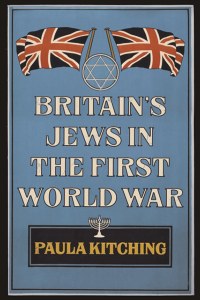 This book tells the story of the Jewish community, of its individuals and its groups, who contributed to the First World War. It describes the experiences of some of those who served and the impact the war had on the community and its members, and explores some of the uniquely Jewish experiences and questions that the war raised: for example, how do you stay kosher on the front line?In August 1914, Britain declared war on Germany. Immediately following the declaration, an appeal went out for volunteers to join the army.

Despite a huge global empire and large navy, Britain had a small professional army. The Jewish communities of Britain stepped up in response, providing well over 40,000 men for the forces and thousands more for activities on the home front. The Jewish community was a small ethnic-religious minority but one that was prepared to stand up and be counted.