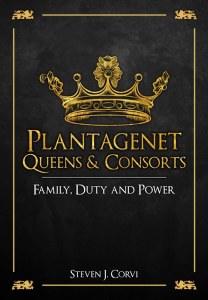 What unacknowledged theme can be found across 250 years of English history? What thread runs throughout the Plantagenet Royal House, including as it does the `cadet' houses of Lancaster and York, to the beginning of the Modern Period in 1485? It is the influence on events of the royal women; in particular, the queens. Without children, there is no dynasty, no `house'. Plantagenet Queens and Consorts examines the lives and influence of ten figures, comparing their different approaches to the maintenance of political power in what is always described as a man's world.

On the contrary, there is strong evidence to suggest that these women had more political impact than those who came later - with the exception of Elizabeth I - right up to the present day. Beginning with Eleanor of Provence, loyal spouse of Henry III, the author follows the thread of queenship: Philippa of Hainault, Joan of Navarre, Katherine Valois, Elizabeth Woodville, and others, to Henry VII's Elizabeth of York. These are not marginal figures.

Arguably, the `She-Wolf ', Isabella of France, had more impact on the history of England than her husband Edward II. Elizabeth of York was the daughter, sister, niece, wife, and mother of successive kings of England. As can be seen from the names, several are ostensibly `outsiders' twice over, as female and foreign.

With specially commissioned photographs of locations and close examination of primary sources, Steven Corvi provides a new and invigorating perspective on medieval English (and European) history.

A Brief History of Life in the Middle Ages