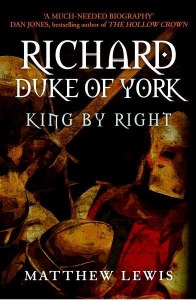 Richard, 3rd Duke of York is frequently used to recall the colours of the rainbow with the mnemonic `Richard Of York Gave Battle In Vain', wrongly believed to be the Grand Old Duke of York who had 10,000 men, or mistaken for his youngest son, Richard III. The son of a traitor, he inherited a dukedom aged four, became the wealthiest man in England at thirteen and later rebelled against his king, and if he is remembered, it is as a man who ignited the Wars of the Roses. Further eclipsed by two of his sons, who would become the mighty warrior Edward IV and the recently rediscovered Richard III, he is an ancestor of the Tudor monarchs and fifteenth great-grandfather to Queen Elizabeth II, yet the man himself is obscured from view.

Matthew Lewis pushes aside the veils of myth and legend to challenge the image of Richard as a man whose insatiable ambition dragged a nation into civil war, revealing a complex family man with unparalleled power and responsibilities. The first person ever recorded to use the Plantagenet name, he pushed the political establishment to its limits, dared to fight back and was forced to do the unimaginable.