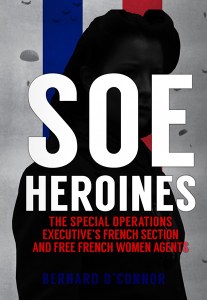 Nearly forty female agents were sent out by the French section of Britain’s Special Operations Executive (SOE) during the Second World War. The youngest was 19 and the oldest 53. Most were trained in paramilitary warfare, fieldcraft, the use of weapons and explosives, sabotage, silent killing, parachuting, codes and cyphers, wireless transmission and receiving, and general spycraft.

These women were flown out and parachuted or landed into France on vital and highly dangerous missions: their task, to work with resistance movements both before and after D-Day. Bernard O’Connor uses recently declassified government documents, personnel files, mission reports and memoirs to assess the successes and failures of the 38 women including Odette Sansom, Denise Colin, and Cécile Pichard.