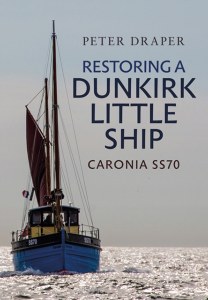 Caronia was built in 1927 on the beach at Tolcarne, Newlyn, Cornwall by Henry, Theodore & Sidney Peake. Her hull was laid in the traditional form of a St Ives Gig and she proudly wore SS70, the registration mark of a St Ives fishing vessel. At the outbreak of the Second World War, Caronia was in Le Havre, requiring a hurried return to these home shores.

She returned to Newhaven where she was commandeered by the navy and, in the company of many hundreds of other Little Ships, she steamed to the beaches of Dunkirk and into the pages of history. Peter Draper acquired Caronia in 2002 and spent more than a decade restoring her to seaworthy condition, carrying out almost all of the restoration work alongside his son. Lavishly illustrated throughout with a fascinating array of photographs, Draper details the story of this restoration and explains how one of the historic Dunkirk Little Ships has returned to its former glory.

Caronia was awarded the National Register of Historic Ships 'Flagship of the Year' for the South and South West in 2017, and featured in Christopher Nolan's 'Dunkirk' film.