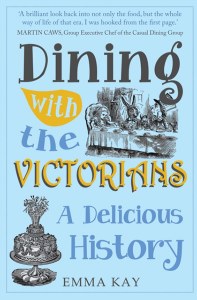 From traditional seaside holiday treats like candy floss, ice cream and fish 'n' chips, to the British fascination for baking, the Victorian era has shaped British culinary heritage. Victoria's austere attitude after an age of Regency indulgence generated enormous cultural change. Excess and gluttony were replaced with morally upright values, and Victoria's large family became the centre of the cultural imagination, with the power to begin new traditions.

If Queen Victoria's family sat down to turkey on Christmas day, so did the rest of the nation. Food was a significant part of the Victorians' lives, whether they had too much of it or not enough. The destitute were fed gruel in the workhouses - the words of Dickens's Oliver are forever imprinted on our minds: `Please, sir, I want some more.' The burgeoning street traders spilling over from the previous century devolved into a whole new culture of `mudlarks', trotter boilers and food slop traders, to name but a few.