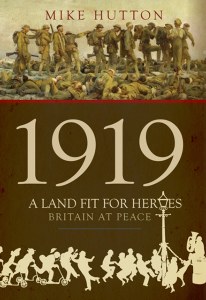 The year 1919 has often been ignored in historians' dizzy haste to enter the world of the Roaring Twenties but it was a year of enormous challenges and change. After a brief period of celebration after the Armistice, reality began to sink in. Returning servicemen were resentful at the prospect of unemployment and lack of available housing. Many of the troops had lost their jobs to women on lower rates of pay. Soon there were strikes, with soldiers and tanks on the streets of Britain. This is also the year in which The Troubles began in earnest.

The Spanish Flu epidemic continued to take its toll. Even the gilded few were unhappy with rising taxation and a scarcity of servants. Worse, men who had made fortunes from the war had invaded their exclusive clubs.

The year was also a pause for breath after the horrors of war; a time to take stock before rushing into an uncertain future that was rapidly announcing itself.