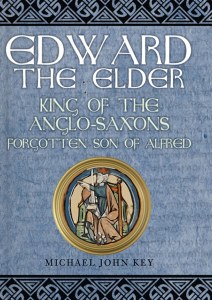 Edward The Elder : King of The Anglo Saxons, Forgotten Son of Alfred

Edward the Elder succeeded his father Alfred the Great to the kingdom of Wessex, but was largely overlooked by his contemporaries (at least in terms of the historical record) and to a greater or lesser extent by later historians. He is the forgotten son of Alfred. Edward deserves to be recognised for his contribution to Anglo-Saxon history and a new assessment of his reign is overdue.

He proved equal to the task of cementing and extending the advances made by his father, and paved the way for the eventual unification of the Anglo-Saxon kingdoms and the nation-state of England. The course of English medieval history after his death was a direct outcome of military successes during his reign. Edward was a ruthlessly efficient military strategist and commander, a strong and stable ruler and administrator, and the most powerful figure during the early decades of the tenth century.

He and his famous sister AEthelflaed constructed fortresses to guard against Viking attacks and Edward conquered the southern Danelaw. He should be acknowledged as a great Anglo-Saxon king in his own right, and is entitled to stand comparison with every English monarch in the millennium that has passed since his reign.