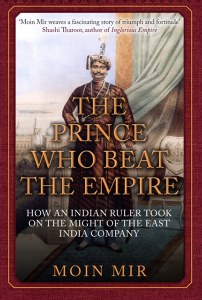 The Prince Who Beat The Empire : How an Indian Ruler Took on the Might of the East India Company

An acclaimed history of empire and resistance: this is the moving story of the rebel prince who beat the world's most powerful corporation. The ships of the East India Company first docked at India's shores in Surat in the early 17th century. In time, through astute politics and military power, the Company became masters of this great port.

But the Company came not with the intention of building Indian maritime trade, but with the single-minded goal of destroying its trading prowess. By 1800 the port was completely annexed, through a Treaty that gave protection to future generations of the local Nawab rulers. But, as elsewhere in India, the Company violated its promises.

It stopped the family's income, usurping its palaces, estates, jewellery and possessions. This left the infant granddaughters of the last Nawab on the brink of destitution. But in an unprecedented counter-attack, the father of the two girls stood to defy the Empire and expose its corruption overseas to the British at home.

Travelling to London, he would shatter the Company's reputation. His campaign for justice would call for the end of British rule in Hindustan. Not only did the prince win back the family's possessions for his daughters but found true love in Victorian England.