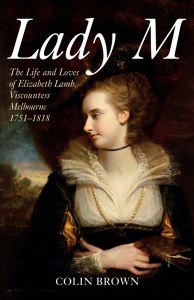 At a time of emerging women leaders, the life of Elizabeth Milbanke, Viscountess Melbourne, the shrewdest political hostess of the Georgian period, is particularly intriguing. It was Byron who called her `Lady M' and it was Byron's tempestuous and very public affair with Elizabeth's daughter-in-law Lady Caroline Lamb that was the scandal of the age. Lady M rose above all adversity, using sex and her husband's wealth to hold court among such glittering figures as Georgiana, Duchess of Devonshire, the Whig leader and wit Charles James Fox and the playwright Sheridan.

Her many lovers included Lord Egremont, Turner's wealthy patron, and the future George IV. Elizabeth schemed on behalf of her children and her ambitions were realised when her son William Lamb (`Lord M') became the young Queen Victoria's confidant and Prime Minister. Based upon primary research - diaries, archives and extensive correspondence between Lady M and Lord Byron - Colin Brown examines the Regency period and its pre-Victorian code of morals from the perspective of a powerful and influential woman on the 200th anniversary of her death.