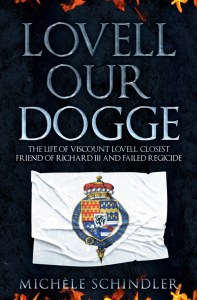 Lovell Our Dogge : The Life of Viscount Lovell, Closest Friend of Richard III and Failed Regecide

In July 1484 Tudor agent William Collingbourne - executed for treason in 1484 - tacked up a lampoon to the walls of St Paul's Cathedral:`The Catte, the Ratte and Lovell our dogge rulyth all Englande under a hogge.'That cat was Sir William Catesby, one of Richard III's principal councillors and Chancellor of the Exchequer, executed after the Battle of Bosworth. The rat was Sir Richard Ratcliffe, who fought with Richard during the Scottish campaigns. And the dog was Francis Lovell, not only an ally of Richard III but his closest friend, and one of the wealthiest barons in England.

Author Michele Schindler returns to primary sources to reveal the man who was not only a boyhood friend of the king-to-be as a ward of Edward IV, but also linked to him by marriage: his wife, Anne FitzHugh, was first cousin to Richard's wife, Anne Neville. Lovell served with the Duke of Gloucester, as Richard then was, in Scotland in 1481. At Richard's coronation, Lovell bore the third sword of state.

In June 1485 he was tasked with guarding the south coast against the landing of Henry Tudor. His loyalty never wavered - even after Bosworth. He organised a revolt in Yorkshire and was behind an attempt to assassinate Henry VII.

Having fled to Flanders, he played a prominent role in the Lambert Simnel enterprise. He fought at the Battle of Stoke Field in 1487 and was seen escaping, destination unknown. His final demise provides an intriguing puzzle that the author teases out.