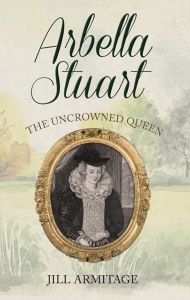 In 1562, Elizabeth I, the last of Henry VIII's children, lay dying of smallpox, and the curse of the Tudor succession again reared its head. The queen was to recover, but the issue remained: if the queen did not produce an heir, who was next in line to succeed?Lady Arbella Stuart was cousin to both the English queen and James VI of Scotland, a woman whose parents' marriage had been orchestrated to provide an heir to the English throne. Raised by her formidable grandmother, Bess of Hardwick, Arbella lived her life in Elizabeth's shadow and, unfortunately, at her mercy.

In this book, Jill Armitage revitalises Arbella's tale, focusing on her lineage, her life and her legacy. Through her story we discover a well-born, well-educated woman desperate to control her own fate, but who is ultimately powerless against those in the scheming Tudor court; and the author explores the harsh consequence that comes from being on the wrong side of the revenge of a jealous, calculating queen.