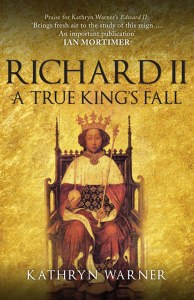 Richard II is a figure famous in England's national myths - the king who went insane, the narcissist, the tyrant of Shakespeare's play. History regards his rule either as that of a superhuman monarch or a crazed and vicious ruler. But Richard II was a complex and conflicted man - a person with faults and shortcomings thrust into a role that demanded greatness.

In this book, Kathryn Warner returns with the first modern biography of Richard II in decades, to paint a portrait of the king with all of his strengths and imperfections left in the picture. An aesthete and patron of the arts as well as a person troubled by a much-maligned `personality disorder', Richard II here emerges from behind the mask of a theatrical character.