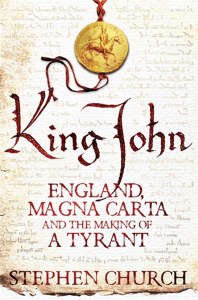 King John : England, Magna Carta and the making of a tyrant

No English king has suffered a worse press than King John: Bad King John, the Sheriff of Nottingham and Robin Hood, Magna Carta - but how to disentangle myth and truth? John was the youngest of the five sons of Henry II and Eleanor of Aquitaine, who, on the death of his brother Richard the Lionheart in 1199, took possession of a vast - and vastly wealthy - inheritance. But by his death in 1215, he had squandered it all, and come close to losing his English kingdom, too.

Stephen Church vividly recounts exactly how John contrived to lose so much, so quickly and in doing so, tells the story of Magna Carta, which, eight hundred years later, is still one of the cornerstones of Western democracy.