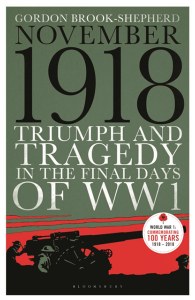 November 1918 : Triumph And Tragedy of the Final Days of WWI

The account of the Great War portrayed in this book spans the last hundred days of the conflict; from the surprise blow struck by the British at Amiens on 8 August, down to the signing of the Armistice which ended the war three months later. For the first time all of the sub-plots in the story are given their proper weight, as we see Germany's allies being knocked out one by one. The triumphs and tragedies are told in the words of the actors themselves, humble and mighty.

Mr Brook-Shepherd's original eye-witness sources range from the eighty-nine-year-old former Empress Zita of Austria-Hungary (the last surviving member of Europe's old ruling order), to private soldiers who fought on both sides of the barbed wire. In describing the death of Old Europe and the suicide of the Empires, the author provides a far-reaching overview of the new world order that dawned in November 1918. The result is a panorama rich in colour and human interest which provides a background to the events of that year; an essential lesson for readers even today.