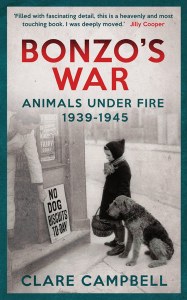 What was it like to be a dog or cat when the world was at war? When food was rationed and cities were bombed? Pets (on the whole) do not write memoirs, so to find the answer to that question, Clare Campbell went in search of voices of those people whose lives were entwined with animals. She found stories - inspiring and harrowing - of animals under fire, of evacuated and homeless pets, of brave animals who provided comfort to humans while the bombs fell. Of pets unwittingly entangled in war, like the Dunkirk pets and the camp followers who switched sides to stay alive; and the 6,000 dogs recruited by the British Army - loaned for duty by their families - many never to return.

Meanwhile with food in short supply, government officials launched a ruthless campaigns against pets...Thoroughly researched and deeply moving, Bonzo's War gives a fascinating account of, and platform for, the forgotten stories as yet unheard, of the creatures big and small caught up in a human conflict far beyond understanding.