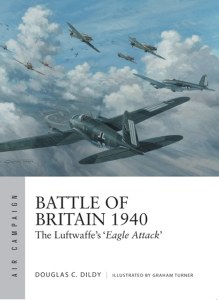 In August 1940, the Luftwaffe began an operation to destroy or neutralize RAF Fighter Command, and enable Hitler to invade Britain that autumn. It was a new type of air warfare: the first ever offensive counter-air campaign against an integrated air defence system. Powerful, combat-proven and previously all-conquering, the German air force had the means to win the Battle of Britain.

Yet it did not. This book is an original, rigorous campaign study of the Luftwaffe's Operation Adlerangriff, researched in Germany's World War II archives and using the most accurate data available. Doug Dildy explains the capabilities of both sides, sets the campaign in context, and argues persuasively that it was the Luftwaffe's own mistakes and failures that led to its defeat, and kept alive the Allies' chance to ultimately defeat Nazi Germany.