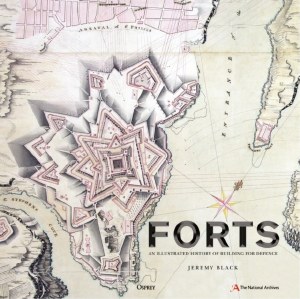 Forts : An illustrated history of building for defence

Ever since humans began to live together in settlements they have felt the need to organise some kind of defence against potentially hostile neighbours. Many of the earliest city states were built as walled towns, and during the medieval era, stone castles were built both as symbols of the defenders' strength and as protection against potential attack. The advent of cannon prompted fortifications to become lower, denser and more complex, and the forts of the eighteenth and nineteenth centuries could appear like snowflakes in their complexity and beautiful geometry.

Without forts, the history of America could have taken a very different course, pirates could have sailed the seas unchecked, and Britain itself could have been successfully invaded. This book explains the history of human fortifications, and is beautifully illustrated using photographs, plans, drawings and maps to explain why they were built, their various functions and their immense historical legacy in laying the foundations of empire.