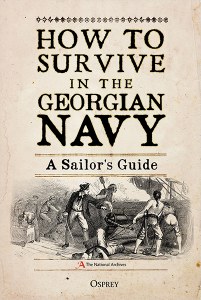 How to Survive In The Georgian Navy : A Sailor's Guide

Rigidly organised and harshly disciplined, the Georgian Royal Navy was an orderly and efficient fighting force which played a major role in Great Britain's wars of the 18th and early 19th centuries. This concise book explores what it was like to be a sailor in the Georgian Navy - focusing on the period from 1714 to 1820, this book examines the Navy within its wider historical, national, organisational and military context, and reveals exactly what it took to survive a life in its service. It looks at how a seaman could join the Royal Navy, including the notorious 'press gangs'; what was meant by 'learning the ropes'; and the severe punishments that could be levied for even minor misdemeanours as a result of the Articles of War.

Military tactics, including manning the guns and tactics for fending off pirates are also revealed, as is the problem of maintaining a healthy diet at sea - and the steps that sailors themselves could take to avoid the dreaded scurvy. Covering other fascinating topics as wide-ranging as exploration, mutiny, storms, shipwrecks, and women on board ships, this `Sailor's Guide' explores the lives of the Navy's officers and sailors, using extracts from contemporary documents and writings to reconstruct their experiences in vivid detail.