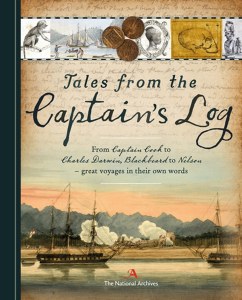 For centuries, ships' commanders kept journals that recorded their missions. These included voyages of discovery to unknown lands, engagements in war and sea and general trade. Many of their logs, diaries and letters were lodged at The National Archives and give a vivid picture of the situations that they encountered.

Entries range from Captain James Cook's notes of his discovery of the South Pacific and Australia, to logs of the great naval battles, such as Trafalgar and the Battle of the Nile. From the ships that attempted to stop piracy in the Caribbean, to the surgeons who recorded the health of the men they tended and naturalists who noted the exotic plants and animals they encountered, comes a fascinating picture of life at sea, richly illustrated with maps, drawings and facsimile documents found alongside the logs in the archives.

Bitten By Witchfever: Wallpaper And Arsenic In The Victorian Home