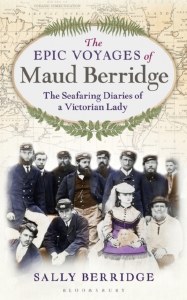 The Epic Voyages of Maud Berridge : The Seafaring Diaries of a Victorian Lady

Maud Berridge (1845-1907) was the wife of a Master Mariner, and she travelled with him on at least five occasions (1869, 1880, 1882, 1883, 1886), sailing to Melbourne with emigrants and cargo. The first occasion was 1869 just after they were married, when Henry was Captain of the Walmer Castle, and they returned via New Zealand instead of travelling east and around Cape Horn. However, most of Henry and Maud's voyages were undertaken in the three-masted clipper Superb, sailing from Gravesend at the start of summer and leaving Melbourne for home at the end of the year (the southern summer, best for heading east with the trade winds and rounding Cape Horn).

Here they stayed for two months exploring SF and surrounds, unloaded the coal and took on a load of wheat (in large bags) at Port Costa. They then sailed down the west coast of the Americas, around Cape Horn and on to Queenstown in County Cork (134 days). The whole voyage took 14 months.

There are also some photographs of Henry, Maud and the crew taken in San Francisco, and a photo from the State Library of Victoria showing the Superb at dock in Melbourne. Maud wrote diaries of these voyages of which one in particular, that of the 1883 voyage, comprise some 50 000 words. The book will tell Maud's story through her own words and through a number of relevant contemporary documents and will paint a picture of the life of a captain's wife in the Victorian era as well as aspects of society in Britain, the US and Australia at the time.

Her enthusiasm for new experiences shines through her writing.