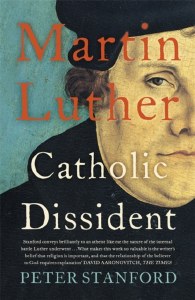 The 31st of October 2017 marks the 500th anniversary of Martin Luther pinning his 95 'Theses' - or reform proposals - to the door of his local university church in Wittenberg.

Most scholars now agree that the details of this eye-catching gesture are more legend than hammer and nails, but what is certainly true is that on this day (probably in a letter to his local Archbishop in Mainz), the Augustinian Friar and theologian issued an outspokenly blunt challenge to his own Catholic Church to reform itself from within - especially over the sale of 'indulgences' - which ultimately precipitated a huge religious and political upheaval right across Europe and divided mainstream Christianity ever after. A new, popular biography from journalist Peter Stanford, looking at Martin Luther from within his Catholic context, examining his actual aims for Catholicism as well as his enduring legacy - and where he might fit within the church today. 'Peter Stanford makes the life of Luther into a thrilling narrative, told from a modern Catholic perspective' Antonia Fraser

Sharpshooters: Marksmen through the ages

The King Is Dead